History of Airboats in the Florida Everglades

Ever wondered where airboats came from?

Airboats, also known as fanboats, were invented by Alexander Graham Bell in 1905 in his Nova Scotia labs.  The first airboat dubbed the “The Ugly Duckling” was built as means of testing various engines and prop configurations. Fifteen years later, the boat was introduced to the Everglades by pilot and engineer of early American aircraft, Glenn Curtiss, to navigate the marshy areas of the Everglades. Check out more history on his contributions at www.curtissway.com.  The modern version is made from aluminum and fiberglass and its design hasn’t changed much from the past.  With speeds of up to 50 MPH, airboats are now used in fishing, hunting and transportation. Of course, the locals can make them much faster for racing! At Everglades Adventure’s you can take a thrilling airboat ride as part of our tour in the Everglades.  Also included in the tour is a 40-minute nature cruise through the Estero Bay Preserve, narrated van transportation to the Everglades and a sit down lunch in Everglades City.  After lunch, you will enjoy a 40-minute swamp buggy ride through the Everglades, an interactive reptile and exotic bird exhibit where you can handle wildlife and a drive through the Everglades to view large alligators and birds.  To book an Everglades Adventure call (239) 405-2060 or book online. 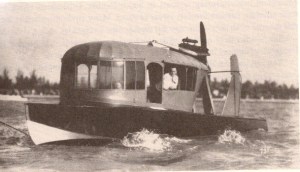