Plants in the Everglades 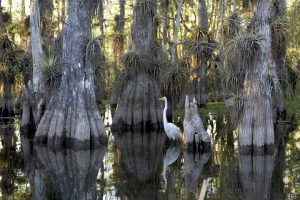 As you will learn during our tour, there is far more to the Everglades than alligators, swamp buggies and airboats. The delicate ecosystem of South Florida depends greatly on the network of plants that call the Florida Everglades home.

To put the vast number of plant species in perspective, The Everglades is home to 120 different types of trees. There are over 100 seed bearing plants. These are plants that produce seeds and are among the oldest plant species; the earliest plants and seeds arose over 360 million years ago.

More plants found in Everglades are Butterfly Pea, White Fragrant Water Lily and Cattail. The most unusual plants that are in the Everglades are the Black Mangrove and the White Mangrove. Identified by their stilt-like roots, black (Avicennia germinans) and white mangroves (Laguncularia racemosa) thrive in tidal waters, where freshwater from the Everglades mixes with saltwater. Everglades National Park boast contains the largest contiguous stand of protected mangrove forest in the hemisphere.

According to a 10-year study conducted by the Institute for Regional Conservation, of more than 760 plants studied in Everglades National Park, nearly 60 are critically imperiled. If action is not taken to protect these plants, we will lose them forever.

Currently, poaching remains the biggest threat to most plants, particularly rare orchids, such as the Ghost Orchid and ferns that top the list of species presumed extinct. The ghost orchid, prized for its long and delicate, pure-white petals is an enduring symbol of South Florida forests but is considered one of the most rare plants in the region.

Poaching isn’t the only concern when it comes to plants in The Everglades. In the 25 years since the last study was last done, another threat has emerged for coastal plants: rising seas triggered by climate change. Before complete flooding and destruction of the region, the encroaching salt water will cause the salinization of the groundwater and the soils above, which will cause plants to die a premature death.