A History of Boats In The Everglades 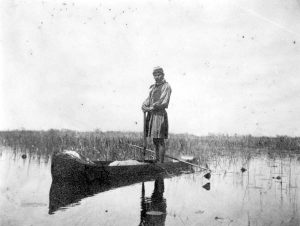 From the outside, the everglades may look like many other areas of Florida. Flat, covered in saw grass and trees. Take a closer look and you will see that much of the Everglades is actually water. In fact, the water in the Everglades functions much like a river, hence earning it’s nickname “The River of Grass”.

From Lake Okeechobee, the water slowly creeps south while also slowly sinking into the ground through porous limestone rock. Underneath this rock is our Floridian Aquifer, an underground system of water that provides South Florida with fresh water for drinking and more. On average, the water in the Everglades is only approximately 5 feet deep in most areas.

Because of this water flow, before roads and highways were built, the Everglades’ natives as well as explorers and adventurers could only travel through the Glades’ with the assistance of a boat.

The first boats to be used by natives who first called the area of the Everglades their home used dug out canoes to skim across the shallow waters of the Glades. Carved from a trunk of a tree, usually cypress, a woodworker would carve the trunk of the tree until its core was hollowed out. At this point, the trunk would be smoothed and shaped into a vessel that resembles our modern canoes.

In later years, because of the shallow grassy waters of the Everglades, it was difficult to use a standard motorboat without it getting stuck. All of this changed when the airboat was introduced to South Florida by aviation innovator Glenn Curtis in the 1920s. An airboat is designed with a flat bottom and has absolutely no mechanical parts underneath the water line. This allows for the vessel to be able to operate in extremely shallow water. Because the Tamiami Trail was completed just about the time that airboats were rising in popularity, they were never used as a major mode of transportation across the glades for the masses.

Airboats have become one of the most defining characteristics of the Everglades. Used mainly for recreational purposes, Airboats have truly opened the mystique of the Everglades to millions of visitors who want to get up close and personal with all of her beauty. We can to provide you with this one of a kind experience!

There is no better way to see birds, alligators and more than by gliding across the glassy surface of the Florida Everglades!