Tours of the Everglades 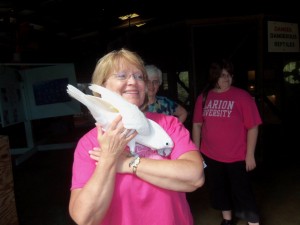 Hey there, Adventurers! Man oh man it’s been a minute since I’ve had a chance to sit down at the swamputer and write out my thoughts.  We have had so many visitors!  If you haven’t been one of ‘em, you need to get moving down to the Everglades to come pay us a visit before the mosquitoes get here.  I have one little buddy down at the Skunk Ape Research Center named Dodo, and he is a cockatiel.  He’s got about the best personality a bird could have, and would you believe that he likes to snuggle?  It’s true!  He picks a nice lady and then lays his head right on her neck and scooches in close so she can rub him under his wing.  Now that’s a smart bird.  Some folks say you can train a bird, but I say birds are better at training folks.  Just in case you find it hard to believe, I put in some pictures so you can see for yourself. Marlowe and Dwight have been having a great time touring the Everglades with everybody. Got an email from Gator D and he updated me on a recent Full day Everglades Adventure he had. He says “What a spectacular day in the Everglades! We had near perfect weather for a March day and we even made it through without getting any of the predicted rain!
We saw deer, alligators, spiders, and held snakes and scorpions and birds and took rides on swamp buggy’s and airboats, got bit by mosquitos, stung by flies, and saw tons of birds! I would say that’s an adventure!
SEE YOU LATER ALLIGATOR!”  Yeah, sounds like a fun day to me!

I will write more as soon as I can.  The full moon is coming and it is nice and bright here at night for hunting around our gator holes.  Gotta go fishin’! Til then, gator friend!