Insects in the Everglades 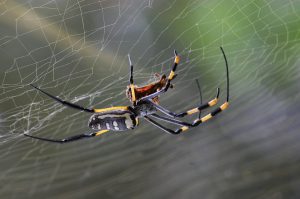 Though insects may seem like pests to most of us, these little guys actually play an extremely vital role in the functioning of the River of Grass’ complex ecosystem. They provide nutrients for many other animals that eat them for dinner and they also assist in pollination and further pest control of extra annoying pests.

Yes, there are mosquitos, dragonflies, and beetles! There are also a few unique, even rare insects that we may be able to spot during our adventure tour. Whirligig beetles, the golden orb spider and lubber grasshoppers are just a few! Let’s take a closer look at these fascinating bugs.

Whirligig beetles can be found on the surface of the Everglades’ many miles of water. Grouping together, these beetles move in fast circles on top of the water. They have even developed divided eyes to be able to see above and below the water’s surface. The beetles can then dive underwater with the assistance of an air bubble they have trapped underneath themselves. These bugs can fly, swim and dive!

The golden orb spider, also known as the banana spider, spins an intricate web that gleams like gold thread when it is in the sunshine. Keep an eye out for these spiders high in the trees.

It isn’t hard to spot a lubber grasshopper, the females can be up to 3 ½ inches long and they are commonly very brightly colored. Lubber’s can’t fly but they can sure jump and walk. Grab your camera if we come across one of these, you’re sure to get a great photo as they do not move very quickly. This grasshopper isn’t desired prey for many creatures as they are highly toxic to eat!

We encourage you to enjoy our tour with an open mind, even if you are not the biggest fan of creepy, crawly critters. These animals can be just as beautiful and interesting as your favorite Southwest Florida animals!