All About The Florida Panther 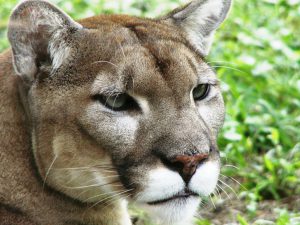 Native to the southern Florida landscape, the Florida Panther is actually one of 32 Puma concolor subspecies known by many names such as puma, cougar, mountain lion, painter, catamount and panther. At one point, these beautiful cats flourished in this region and only began disappearing as the area was settled and developed by humans, starting with the Spanish Conquistadors in the 1600s.

The only breeding population of Florida Panthers is right here in Southwest Florida, south of the Caloosahatchee River. These creatures are solitary animals and generally travel hundreds of miles within their home range in search of prey, shelter or a mate. A male’s home range territory is approximately 200 miles and a female’s approximate home range territory is 75 miles. These big cats tend to avoid the sweltering Florida heat and are most active at dusk and dawn.

Mating season is during the winter and spring months and kittens are generally born in a litter size of 1 to 4. If you think the adult panthers were cute, just take a peek at a Florida Panther kitten! Darker in color than their parents, these kittens’ spots will fade as they mature.

Because of their small population, it is uncommon to see a Florida Panther during your time in the Everglades. There are even some native south Floridians who have never spotted one! With that being said, we have seen Florida Panthers on our eco tour before…. so keep your eyes open!

As we mentioned before, the Florida Panther is one of the most endangered species on our planet. There are a number of conservation groups that fight every single day to ensure that these creatures can continue to survive as wild creatures in their native habitat. If you would like to assist in the fight to keep Florida Panthers’ alive for future generations, there are a number of great organizations you can donate time, money or both to. Learning about these creatures and sharing your knowledge with others is a great way to raise awareness about this irreplaceable wild cat.

The best place to learn more? Right here on our Everglades tour!