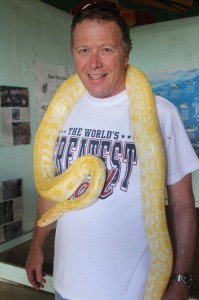 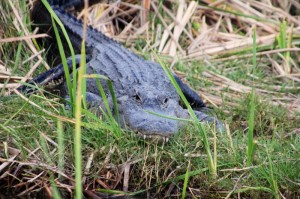 Man, have we been having a blast out here in the Everglades.  I mean, a blast!  Our people on the day tours have been seeing and doing all kinds of glades-style fun things like holding 50 lb Burmese pythons at the interactive animal exhibit and seeing the big bull alligators strutting their stuff on the banks of the Turner River.

In the picture, you can see Fat Neck, an old friend of mine, who’s come down to Ochopee to let the ladies know he’s back in the neighborhood.  He’s a right fine catch for mating season, which is just around the corner.  Things get real exciting down here then, what with the bull gators showing out all the time and the pretty little females acting too good for ‘em.  It’s a great time to be down in the glades for wildlife lookin’!

A few days ago, one of the tour groups showed up for their swamp buggy ride and had been told that an endangered Florida panther had just killed a deer on the path that very morning!  It was a thrill to know that old boy might have still been hiding in the sawgrass as they puttered by on that contraption down the buggy path.  But that means the panthers are out here, and wouldn’t that be something else if you got to see one!